Understanding Dogs: Why Does My Dog Yawn When I Pet Him?

Yawning is a common response to a range of things in all living beings. Commonly, it is triggered by exhaustion, sleepiness, and stress. Dogs are no different when it comes to such involuntary responses.

But you might be contemplating when your dog does it on some unusual occasions, such as during a petting session. You might be asking, “why does my dog yawn when I pet him?”

Well, it is difficult to ascertain what exactly your lovely canine fella is trying to communicate—but you can look for the following!

Why Does My Dog Yawn When I Pet Him?

Yawning indicates that a dog is seeking a nap. It is just a reflex from the brain to wake him up and make him more alert. Your dog is more likely to do so when you are petting him during his bedtime. Feeling cozy and comfortable, he will march towards a good nap in no time. If your dog has had an exhausting day, too, he will tend to sleep and yawn earlier than normal.

Dogs use 30 different calming signals to express their humility and submissiveness, yawning being one of those. Whenever they are uncomfortable, they express such signals to say that they do not want conflict. If your dog shows yawning as a calming signal when you pet him, it means that he might not feel right, and you should stop for a while. The dog might also turn the entire body aside and sniff around the things for no apparent reason.

Physically active dogs are known to yawn when expecting something big, such as a treat or toy. Dogs do so to prepare their bodies for the forthcoming things. A dog sets its body for the action—they take a deep breath that fills its vital organs and brain with enough oxygen. Maybe you are holding something in your hands while petting your dog, and he is looking for it.

Most dogs tend to develop such feelings for their favorite human beings within a few days of their adoption. However, in general, it takes about three weeks for our canine fellas to start feeling “at home.” Dogs also show other signs, like leaning against their owners when they trust someone.

A range of mental and physical conditions, such as exhaustion, apathy, and tension, can lead to yawning in dogs. There can frequently occur, even when you are petting your dog. However, such yawns are generally longer and more intense.

In addition, it can also be accompanied by some other signs of nervousness, including drooling and licking. There can be several reasons behind this. If your dog is prone to separation anxiety, he is more likely to fall into stress. Similarly, if he has had a long day full of activities, he is bound to feel tired.

Dogs read and even imitate the facial expressions of their owners and favorite human beings. Dogs are among human beings’ best friends, and they cannot stop copying at least some features from them, even if it is a yawn!

According to a study in which different dogs were observed on how they reacted to odd facial gestures, most of them were reported to mimic the yawns of their owners. Moreover, they were more likely to copy the facial expressions of the people closest to them.

Dogs are capable of faking their yawns. If your dog is only trying to copy your facial expressions, he is possibly not yawning naturally.

Besides supplying oxygen and decreasing carbon dioxide levels, yawning also helps regulate body temperatures. It can also chill out the brain, making a dog feel well. If your dog yawns during the petting session, you might be petting your dog in a warm place.

In addition to panting and breathing heavily, he will often resort to large yawns to let the air rush into his body, cooling down every nook and corner of it.

Occasional yawning is not an issue in dogs; however, if your pooch is doing it very frequently, it can be a sign of various medical issues. Most common among those include sleep apnea, narcolepsy, and reaction to a medication.

Other common culprits are dental diseases and disorders. Mouth ulcers and broken teeth can also lead to excessive yawning. It is, in fact, pertinent to check your dog’s mouth first when you suspect any medical issue behind his yawning habit.

Generally, a dog yawning during petting sessions is not an issue. By and large, it is merely because of some behavioral habits. However, if you suspect any medical condition behind it, you do need to worry. To find out for sure, consider contacting a vet. Even if there is no physical problem, she or he can easily spot any psychological issue, such as boredom or anxiety leading to it.

For the time being, focus on having a good relationship with your dog and keeping him healthy. Give him enough physical stimulation daily, provide him with healthy food, and consider getting him some great toys and puzzles.

Do Dogs Yawn While Cuddling Too?

Yes, dogs are expected to yawn in front of the person they are emotionally bonded to. Since cuddling takes it to the next level, they can yawn during such sessions. Dogs are known to cuddle the people they love, especially when they see someone as a pack leader. You take the petting session to the next level; let your dog take his affection to the same!

Conclusion: Why Does My Dog Yawn When I Pet Him?

Your dog yawns when you pet him because of excitement, sleepiness, or calmness. He might also do it out of any physical or mental issue or simply copy your facial expression. But you do not have to worry about that—your dog is most likely not to have any issues since it is a natural tendency common to all living beings to yawn. To be on the safe side, if you see frequent yawning in your pet, you must consult a vet.

Why Does My Dog Stretch So Much? [6 Reasons]

Understanding Dogs: Why Does My Dog Nibble on My Clothes?

9 Reasons Dog Nibbles Your Ear and How to Stop it 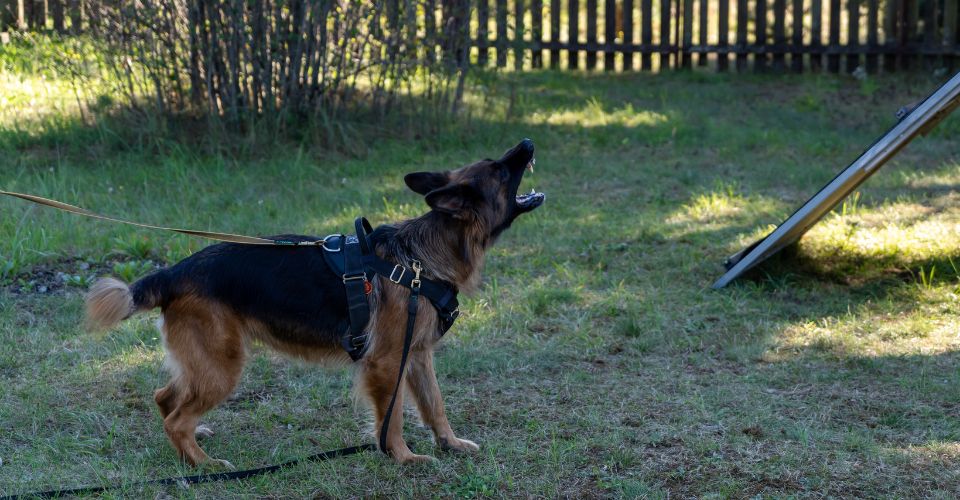 Do Dogs Get Tired of Barking?