Have you ever noticed your cats digging the trash to get the Q-tips thrown away after using them to clean your ears? If so, this is perfectly normal. Cats have highly developed olfactory systems that allow these furry creatures to sense everything with their cute little noses. Earwax may just be a waste for us that needs to be cleaned and thrown away. But not all that we call waste is waste for others, especially animals. And the same is the case with earwax as well.

Cats are fond of earwax because the aroma of proteins present in earwax stimulates their senses. In addition to proteins, earwax also contains dead cells, fatty acids, and a small amount of cholesterol. If you have noticed that your cats have an affinity for earwax, you are not alone as many cat owners have reported such behavior.

It might seem gross to humans but it is the natural instinct of cats to be attracted to something that may have a nutritional value for them.

To understand this concept of a cat’s nature of liking earwax, we are going to explore both cats and earwax in the lines below.

1. The Smell of Earwax Attracts Cats

Kitties are attracted to earwax because it smells good to them. You might wonder why cats love earwax although it doesn’t have a pleasant or attractive odor and is just made of fatty acids and dead skin cells.

The reason behind this attraction is that cats survive on animal proteins. It means that the main motivating factor of cats liking earwax is that it is simply a source of proteins for these animals. Cats have only 500 taste buds, a very low figure in comparison to humans who have around 10,000 taste buds.

The difference in taste buds causes cats to taste things differently than the way we do. For example, cats cannot taste things as sweet or sugary—they are sweet-blind. So, if your cat is fond of sweet food items like watermelon, strawberries, honey, whipped cream, and peanut butter, etc., it is never because of their sweet taste—cats have their own reasons like the meaty texture of fruits and perhaps it’s the fats in that food that is making certain food irresistible to your cat.

The lack of taste buds in cats is compensated by a good olfactory system. These animals have a very strong sense of smell. This unique quality of sensing smells helps them in discerning between different kinds of smells, and being attracted to the one that is better for them diet-wise. So if you have thrown a Q-tip in the garbage, your cat will be digging through the garbage to get it as she can smell there are some healthy fats in there.

2. Presence of Fats and Proteins in Earwax

A kitty uses its nose more than its tongue for tasting food because of a high number of scent receptors compared to the taste ones. These scent receptors make up for the low number of taste buds. If you compare that with yourself, a blocked nose will make the food less appetizing.

Did you ever catch your cat licking another cat’s ears? Cats can smell their own earwax as well as that of their humans and other fellow cats. They are instinctively inclined towards any animal protein source. So a cat would not only be interested in your earwax but also the earwax in their fellow cats’ ears. You may have often observed a cat licking the ears of another cat. This is less for grooming reasons and more for getting a lick of earwax.

Earwax keeps out debris and insects from your ear canal. So, this means additional nutritional value for cats as it contains proteins and a small amount of cholesterol. Cats love the wax’s smell and taste because of its composition. So, don’t be surprised if your furry friend finds it irresistible.

3. Grooming Ability of a Cat

One of the reasons why your cat licks your earwax is because she is grooming you. Cats have an innate behavior they learn during their kittenhood. The mother cats spend a lot of time grooming their babies and that’s the reason why your fluffy companions like to groom themselves, you, and their fellow cats. Cats also groom each other which consequently solidifies the love and bond between them.

What is Earwax and What Does it Contain?

All of us know what earwax is and are familiar with its sticky nature, but most of us are unfamiliar with its composition. Do you believe earwax represents bad hygiene? Well, that’s entirely false as it forms naturally and has numerous benefits.

Earwax is a coating inside the ear canal that holds pesky debris like dead cells, dirt, dust that comes in contact with the ears. Earwax is a necessary element that protects the inner ear and ear canals from damage.

Earwax is made up, as already discussed, of fatty acids, little amounts of cholesterol, and dead skin cells. The main constituent of earwax is dead skin cells that drop in the ear canal. These dead cells are then mixed with gland secretions that ultimately result in the formation of earwax.

The sebaceous glands are present in the outer ear canal, and it secretes sebum—an oily substance. Fatty acids and a small amount of cholesterol also become part of earwax. All these components are mixed and produce a magical concoction of earwax that our cats and sometimes even dogs find tempting.

Is Eating Earwax Harmful to Cats?

Kitties are often seen licking and grooming their ears more than any other part of their body. If you notice closely, cats lick both the inner and outer parts of their ears. The reason is pretty obvious; the earwax attracts these adorable pets. However, if your cat is pawing at the ears as well, she might have a feline ear infection.

Human earwax, in particular, is not harmful to cats. It consists of fatty acids, cholesterol, and dead skin, as discussed earlier, just like the earwax of any other animal. So, there’s nothing unhealthy for cats that can make them acutely ill in the long run.

Animal proteins found in earwax are actually antimicrobial peptides. These peptides are helpful for humans as they prevent the occurrence of fungal and bacterial diseases. They not only help humans from illness but also protect cats from various allergies.

As cats have comparatively lesser tastebuds in comparison to humans, the earwax doesn’t taste as bad to them. So, while it may appear gross to us, it is not harmful to cats.

Cats like—love—earwax because it contains proteins, fats, dead skin, and a bit of cholesterol.

Cats are familiar with the odor of protein present in their cat food. So, they are naturally fascinated by the wax—it’s the aroma of animal proteins emanating from earwax that makes it irresistible for cats.

Now, in case, you see your kitties focusing on excessively grooming your ears or are trying to catch your used Q-tips, you will know the reason. You don’t need to worry about this as it will not harm them. However, it’s better not to allow your cat to go after the wax just as a precaution. 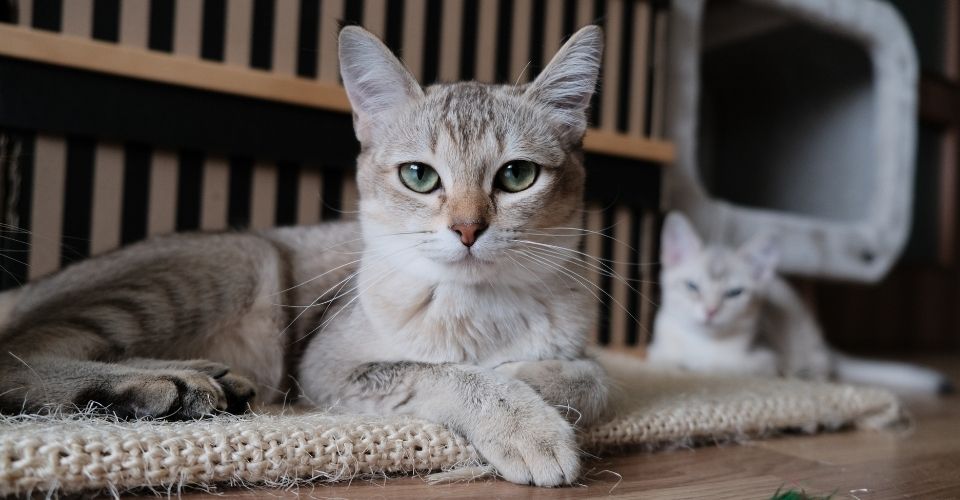 Why Does My Cat Bite Me In The Morning? Everything You Need To Know 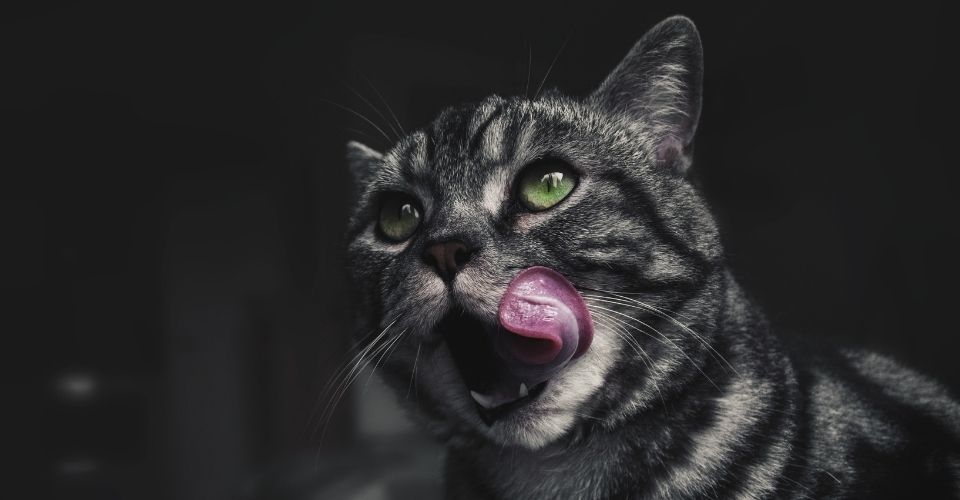 Why is My Cat Licking Walls? 10 Reasons Behind this Odd Behavior 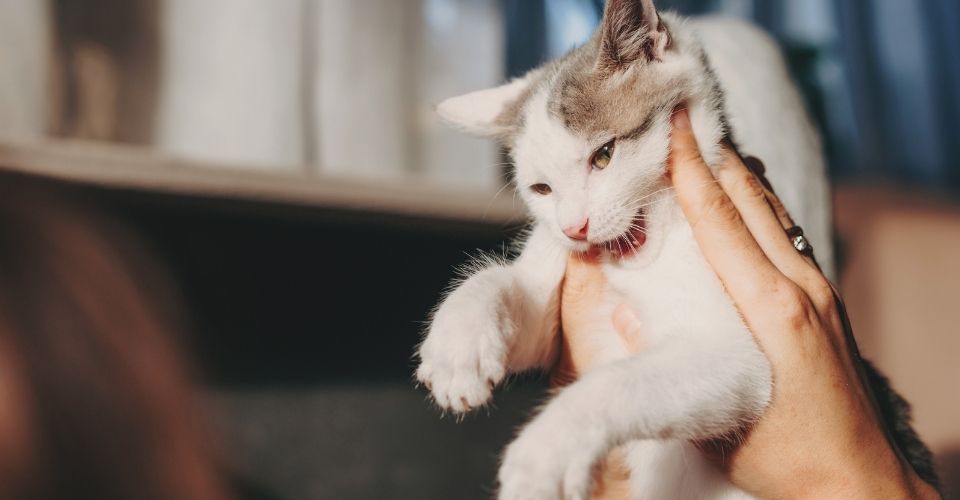 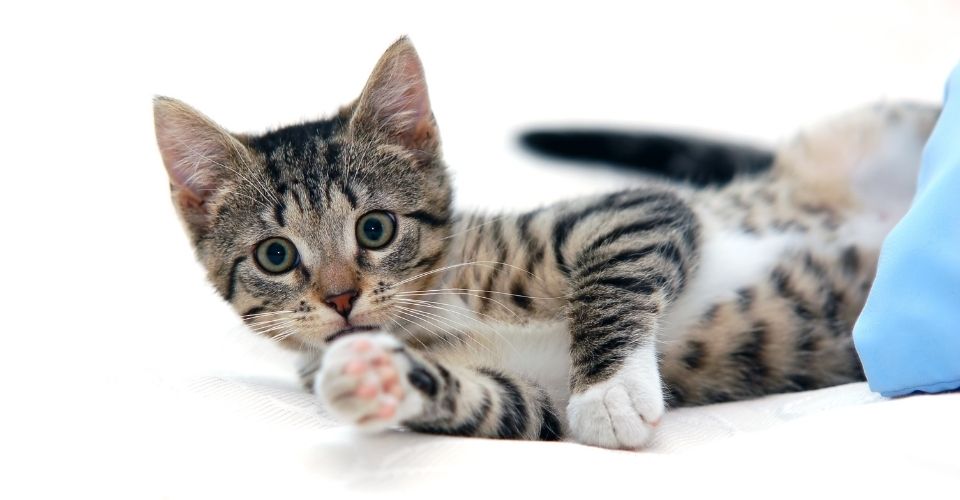 Why Does My Cat Stare at Me While I Sleep?