Parakeet Molting: What and How Often Is Normal?

Parakeet molting is often referred to as shedding. Parakeets go through this process throughout their lives. Most pet owners get concerned during their budgies’ molting phases. But there is nothing to worry about; it is a normal process that helps them get rid of the worn-out, old feathers and grow new ones.

Parakeets start molting when they are 12 weeks old, and in some cases, after 14 weeks. Afterward, they molt every year. Few species of parakeets go through molting twice a year.

Molting is an annual cycle through which all parakeet breeds go through. They shed their old feathers and grow new ones, more aesthetic to the eyes than the formers ones. It doesn’t happen at once; instead, it involves a gradual replacement of their feathers, letting birds fly and stay warm while they shed their old coat.

All feathers of parakeet go through molting, and when it happens, the bird might look ragged until it grows another coat. This whole process of shedding and re-growing takes a few weeks. If your bird is big, you will collect its feathers at the bottom of the cage, but the small ones are lightweight and fly out of the cage.

Shedding is not a difficult stage for the parakeets as they are dead feathers unless you pluck them yourself which can hurt your bird. What is painful for parakeets is the stage where they grow new feathers. They will appear ill, avoid flying and other activities.

Molting is considered a development stage of the bird, as it grows bigger with every passing year, requiring new but large feathers to maintain its flight and beauty. Molting is associated with the hormonal changes in parakeets, which help in immunity development and cell division (egg-laying).

Types of Molting in Parakeets

There are four types of molting a parakeet or bird goes through in their life.

Baby parakeets have sub-adult plumage that needs to be shed because adult parakeets require substantially large feathers to fly and keep them warm. This process starts at the age of 12 weeks and lasts for 5 – 12 weeks.

During the breeding season, parakeets develop bright and attractive breeding plumage that molts and regrow into light and substantial colors when the season is over. This process takes 3 – 4 weeks.

When parakeets need to breed, they grow bright-colored feathers which help them attract male parakeets. This process of molting start in springs and take 4 – 5 weeks.

To maintain a healthy plumage, parakeets go through molting (other than breeding) before winters. It is the general replacement of the worn-out feather with new ones to keep them warm in winters. Like others, it also takes 3 – 6 weeks.

Unlike normal molting, many situations arise during and after the molting cycle of the bird. We discuss some of them below.

Molting once a year is a normal process through which all parakeets go through. But when they molt for more than once a year, when you should start worrying about your bird. This frequent molting is normally due to infections or induced by the environment they live in.

Artificial lights trigger the birds’ bodies to start molting. But that is a rare case, frequent molting is a sign of virus attached to your bird by interaction with infected birds or any other source. Get your parakeet to the vet and test for viruses if they go through molting more than once.

Patches (created by feather shedding) are often confused with molting, but they are signs of illnesses or viruses infections. Sometimes parakeets develop bald patches because of malnutrition. If a parakeet develops these bald patches, examine it by a vet to get to the underlying cause and subsequent treatment.

Some unusual feathers grow after molting, known as pin feathers. They are like dark black dots, which make other feathers appear ruffled. Pin feathers grow due to poor nutrition and stress during the molting period.

The molting process overall takes 5-12 weeks in parakeets, but a few breeds can take up to 1 year to develop new feathers. The timing and intensity of molting vary for every breed. Some breeds start molting after winters and some before winters to re-grow new feathers, keeping them warm during winters. But the overall process is the same for all breeds.

Molting in parakeets starts in a symmetrical pattern, not disturbing the bird’s flying needs. They start molting across the tail, body, and wings, respectively.

This whole stage takes around 2 – 3 weeks. It is the initial stage where the bird’s body starts getting ready for molting.

After that, the bird starts to loosen their quills in their shaft, which help the feathers to fall off easily without any pain or injury.

Avoid plucking the feathers from the parakeet’s body, as it may disturb the natural process. This stage also takes 2 – 3 weeks.

After shedding, new feathers start developing in bird shafts. They grow in a symmetrical pattern around the wings and tails—growing with visible gaps. But, on the body, the feathers overlap each other so that the bird’s skin is not exposed.

Parakeets do not molt in the breeding and migration period. They usually breed before—to develop attractive breeding plumage—and after breeding season.

a. Difficulty in Flying

Although the molting process is a gradual and slow process, still sometimes it becomes challenging for parakeets to fly.

b. Susceptible to Predators

In the wild, birds are more susceptible to predators, especially during the molting period. This threat becomes even more pronounced when the feathers are not fully developed yet.

During molting, parakeets require proper nutrients. If not adequately attended to, it will affect their development, and feathers will be thinner and poorly formed, leading to many difficulties during winters and get birds prone to diseases.

Molting duration is a very critical factor in this process. The molting may stall if the bird cannot get enough nutrition or is going through some stress. If the duration prolongs, contact a vet to diagnose the disease and recommend medications or procedures that would smooth the process.

It is a condition caused during the molting process where parakeets go through a situation of shedding, but new feathers don’t grow back.

French molt is associated with the loss of feathers and the breaking of tail and wing feathers. The possible reasons behind French molting is papovavirus infection, budgerigar pox virus, and some nutritional deficiencies.

The Behavior of Parakeet During Molting

Molting as such does not cause any physical discomfort to the parakeet. But there is a noticeable change in the behavior of parakeets. Some of these changes are listed below.

How to Keep Your Parakeet Comfortable During Molting?

Mist your bird twice a day, as it will provide humidity, making molting less itchy for parakeets.

Use a spray bottle with room-temperature water. Misting soften the sheath around the pin feather, which will ease the shedding when the new feather starts growing. Misting is a health technique to keep your parakeet healthy and hydrated, even on regular days other than molting.

Molting is an uncomfortable process for parakeets; try not to disturb the bird when it is resting or sleeping. During molting, the sleep cycle of a parakeet increases up to 12 – 13 hours per day.

Be patient with your parakeet and let it rest during molting days. If they don’t get enough rest, they will go through stress, affecting their feather development.

Avoid petting your bird during this stage, as pin feathers get sensitive and filled with blood during the start of feather formation. Your petting may disturb the bird, and instead of calming, it might end up getting hurt. Once the feathers start developing and the sheath around the base of the feather flakes gets off, you can pet them again without hurting them. This is the end stage of molting.

· Keep Them in a Peaceful and Warm Place

Keep your parakeet in a warm place during molting. As their layer of insulation (feathers) start shedding, they are more exposed to cold breezes. A suitable temperature for parakeets during molting is 21°C or 70°F. Keep them away from windows or doors, as it will be windy and may disturb the parakeet. A too-hot room is also a source of discomfort for parakeets and causes a delay in the molting process.

Parakeet molting is a normal process, which all parakeets go through once a year. During the molting, parakeets require additional care of their diet and health. This process is complicated for parakeets in the wild as they are prone to predators and don’t have enough nutrients. Pet parakeets are dependent on their owners for all their needs. If properly cared for, molting would merely be a small phase that won’t disturb your bird, but if neglected, you can end up getting your bird infected or lose your fella forever. 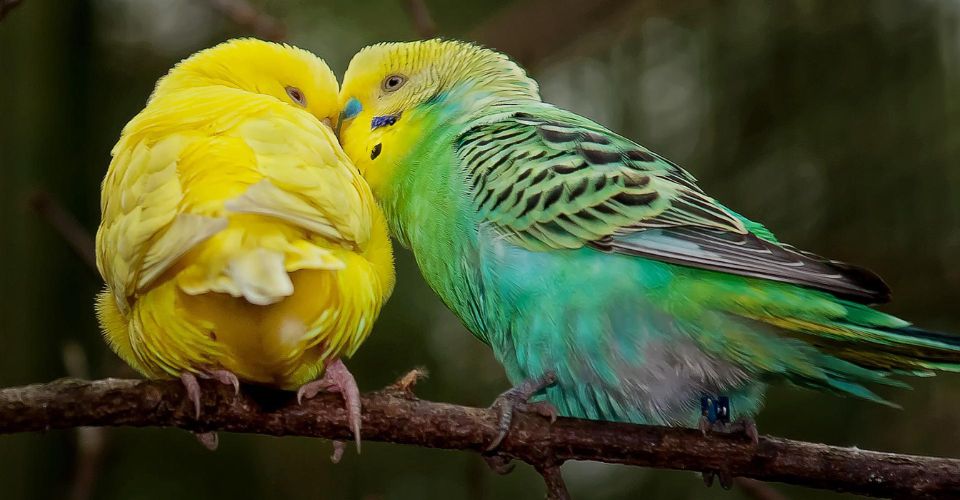 How to Stop Male Budgie From Mating With the Female? 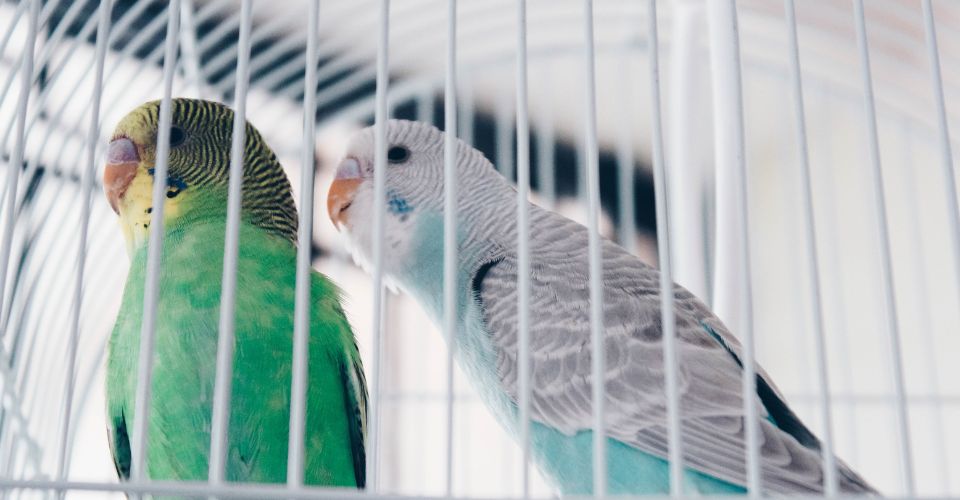 Why Are My Budgies Not Mating? Top 6 Reasons and Solutions 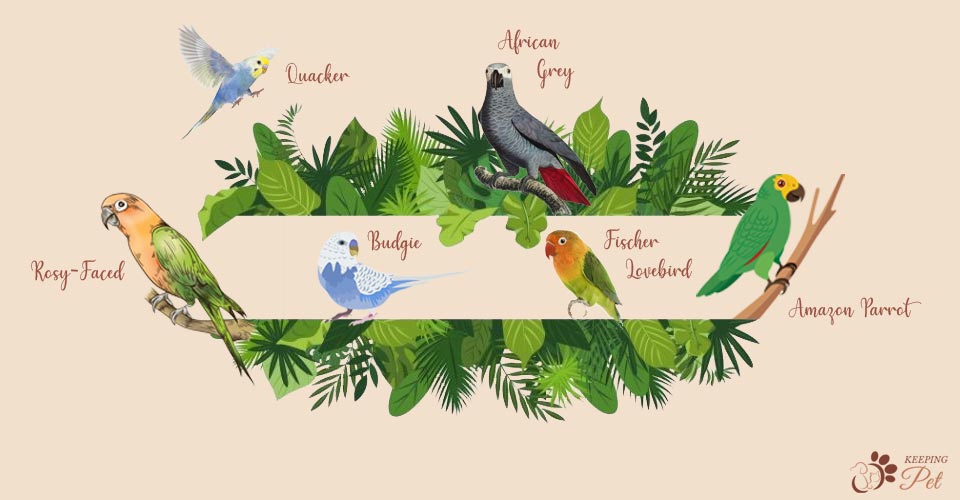 Birds of Paradise: A Dive Into the 9 Species of Lovebirds 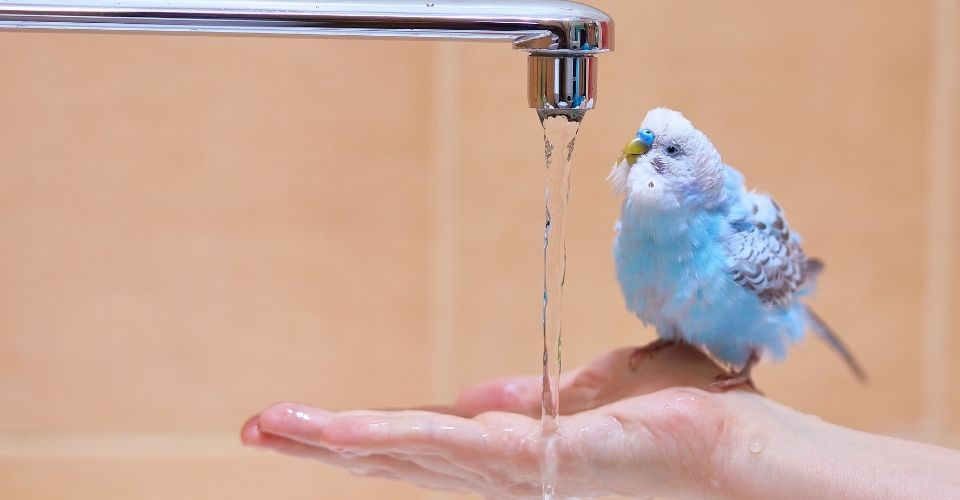 How to Bathe a Parakeet: A Step-By-Step Guide